WELCOME TO NANTWICH PARK ROAD CROWN GREEN BOWLING CLUB
THE FRANK CREWE CUP, PLAYERS NOMINATED BY CAPTAINS - FRIDAY EVENING 8th OCTOBER 2021
On Friday evening 8th Oct the club held the first of the club competitions with entrants nominated by Team captains.
The Frank Crewe Cup was played for by the top 4 bowlers from the A and B teams in the Market Drayton league. This cup had not been played for since 2019 as there were no league games last year.
The B team members were given a handicap of 2 chalks. The first round was notable for a close game between Tina and Gordon and the semis saw Rob give Steve a good run .
However the excellent Final which saw a  very high standard of bowling was finally won by Jock Timlett,  whose name appears on the trophy a considerable number of times.
THE JONES BROTHERS CUP, LADIES SINGLES - SUNDAY 19th SEPTEMBER 2021
On Sunday 19th September the Jones Bros Cup was held at Park Road. Unfortunately, for what is the main ladies competition, only 10 ladies entered because of other commitments, partly I suspect as a result of the release from the Covid restrictions and an opportunity to enjoy their freedom again.
However a cross section of keen committed bowlers enjoyed the day. After two preliminary matches we entered the quarter finals, semis and final.
A lady worth mentioning is Sarah Doorbar who entered her first competition at short notice and enjoyed a close game with Dawn Wylie, a subsequent finalist.
The star performer on the day was Joyce Sadler who bowled well all day and took the trophy .
Thanks again to helpers and entrants for making it an enjoyable competition.
THE BRADSHAW CUP, MEN'S SINGLES - SUNDAY 12th SEPTEMBER 2021
Sunday 12th Sept saw a fine turnout of 20 members competing for the Bradshaws Cup which is a men's singles competition. It was pleasing to see not only some of our long standing members but newer members with aspirations to improve their bowling against more experienced players.
Our 10 preliminary  rounds saw some closely contested games with a high standard of bowling on Jim's well prepared and tricky green. Notably the veteran David Latham who had problems with his bowling arm and chose to bowl left handed, giving David Dobson a very close game but losing 21-18.
Some tight quarter finals with excellent bowling saw our senior bowlers coming to the fore with Gordon Lucas, not for the first time and Steve Proctor making the final.
The final itself was won by Steve with a great performance and deservedly receiving the trophy from Jim our President.
Thanks again to Mary for the sustaining bacon and sausage baps and members for making it an enjoyable and successful day.
JOE WHITE CUP, MENS' DOUBLES - SUNDAY 22nd AUGUST
On Sunday 22nd August the Joe White Cup for mens' doubles was held at Park Road. We had a good entry of 24 bowlers with a whole range of bowling talents from within the club and it was very pleasing to see some of our newer members playing. Looking forward to a more normal bowling year in 2022 it is a chance for them to experience some competitive edge for possible future club team inclusion.
There were some strong performances in the early rounds with Darren Bailey and newcomer Tim Doughill just losing with 20 against Jim Moulton and John Lea.
A strong combination of new member Chris Makin and old stager Brian Whitehouse beat the A-teamers Phil and Gordon to reach the final.
Donald Charlesworth and the on form Tony Heslewood, who had competed strongly in the early rounds, won the final 21-12 to take the cup.
An excellent day's bowling and thanks to everyone, particularly Mary and Joyce for the sustaining bacon butties.
JOE WHITE CUP, LADIES DOUBLES - SUNDAY 15th AUGUST
On Sunday 15th August 14 very competitive lady bowlers took part in the Joe White Cup for Ladies Doubles.
Although we had a small number of entrants we had some very close games, not least in the final when a strong comeback from Elsa Jackman and June Vernon just failed to pip the eventual winners Maire Peddar and Mary Moulton.
Mary is enjoying a strong bowling season, winning her second doubles trophy, although Jim is a little concerned about having to polish them!
Again, thank you to the entrants and spectators who made it a most enjoyable day.
PRESIDENT'S DAY 2021
Sunday 1st August saw an excellent turnout of members and guests to support our President Jim Moulton.
An excellent lunch enabled and enjoyable ambiance for members to come together again after all the difficulties of Covid. It did prove quite difficult to prise people away from their conversations for the post-lunch group photograph and continuation of the bowling competition.
In all 48 members competed in a 3 games of 11 ends Round Robin competition with fiendly rivalries prevailing.
The competition ran through the morning and continued after lunch until the early evening., enabling everyone to be involved.
We ended with a semi-final and final from the winners of each of the 4 groups.
The final was won by Alan Cliffe and Brian Whitehouse with John Morris and (as ever!) Margaret Wilcox runners-up.
Our thanks to everyone for the support and hard work in making this a highly successful and friendly President's Day for Jim and Mary.

2021 CUP MATCH RESULTS
THE HARRY GROCOTT CUP (Mixed Doubles) - SUNDAY 18th JULY
The Harry Grocott Cup matches were played on one of the hottest days of the year, but still enjoyed by all.
The winners were David Dobson and Elsa Jackman hotly contested by Gordon King and Pam Parton as runners-up.
THE LAVERTON CUP (Mixed Singles Handicap) - SUNDAY 11th JULY
Sunday the 11th July saw a great turnout of 34 members competing for the Laverton Cup .
This is a mixed singles handicap competition played to 21 point each game . with 35 matches play a long day was envisaged so we played with 5 blocks on the green in the early rounds, which wasn't a problem on the large green .
We saw some fine competitive bowling with some notable individual performances, not least from the veteran David Dobson who threw his cap into the air on reaching the semi finals, something he says he hasn't done for some time !!
The final between Steve Proctor and Jock Timlet was of an expected high standard, with Jock winning a very close game 21-19 .
Our thanks to all the competitors and helpers who enabled an enjoyable game for all.
THE NORMAN SCOTT CUP (Mixed Doubles) - SUNDAY 4th JULY
Sunday July 4th saw the start of the year's Club Competitions. The early rounds of the Norman Scott Mixed Doubles took place under very wet conditions with water accumulating on parts of the green. However, our resolute bowlers, 30 in number, enjoyed some close competitive games!
The weather improved as the day progressed with the final between Gordon Lucas and Mary Moulton and Clare Hollins and Reuben Lines starting under sunny, warm conditions which eventually deteriorated to rain once more  - I suppose this reflected the whole day.
An excellent close game was eventually won by Mary and Gordon.
Thanks to all competitors and helpers who enabled the Club to have a successful day.
THE DAGFIELD CUP (MIXED DOUBLES) - SUNDAY 20th JUNE
A good number of entries in nice weather ended with Gordon King and Kathryn Clarke beating Graham Stevens and Mary Moulton to win the Dagfield cup.
Thanks go to Pam Parton for doing the tricky job of organising the players and Jim and Mary Moulton for excellent refreshments, all done in a Covid-safe way.
2020 CUP MATCH RESULTS
JONES BROTHERS CUP LADIES SINGLES CUP COMPETITION - SUNDAY 27th SEPTEMBER (THE LAST COMPETITION OF 2020)
Our green, carefully attended by Jim Moulton throughout 'Lockdown', is running as well as it ever has for the past few years.
This suited the ladies and they were able to exploit the full use of our large green.
The 14 ladies who took part were as competitive as ever with some very close matches with Joyce Sadler, Dawn Wylie and Mary Moulton coming through the early round and worthy of a mention.
In the semi-finals Margaret Wilcox had a hard-fought game against Anthea Grundy, losing with 16 and Dawn Wylie beat Pam Parton to 17.
Antea Grundy won an absorbing final against Dawn Wylie and now holds the Jones Brothers Trophy for the second year running.
Our thanks go to all those who competed in games this year and especially the Park Road team who organised and enabled the matches to be played within the Covi-19 regulations. 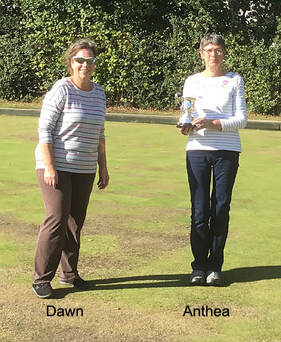 BRADSHAW MENS SINGLES CUP COMPETITION - SUNDAY 20th SEPTEMBER 2020
Today was another opportunity for the club to hold what will probably be our last mens competition of the year.
The Bradshaw Cup is a mens singles competition and is an opportunity for members to pit themselves against the best bowlers in the club.
20 members took part with some close competitive games, with Gordon Lucas again prominent in his game against Phil Jones.
It is an opportunity for some of our less experienced bowlers to be challenged but hopefully gain from the experience.
Our semi finalists were Jock, Steve, David and Phil, with Jock and Phil reaching the final.
Phil, who played well all day finally won for the second year running and took the trophy home to fill the gap on the sideboard.
Again everyone enjoyed the day with an opportunity for competitive bowling which the Covid has restricted so much. 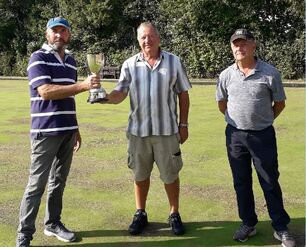 HARRY GROCOTT MIXED DOUBLES CUP COMPETITION - SUNDAY 13th SEPTEMBER 2020
Another good turnout on a beautiful day, this time for the Harry Grocott Mixed Doubles Cup.
Fourteen drawn pairs began bowling at 10 a.m. with, as ever, some very closely matched games.
The Anthea Grundy & John Morris v. Pat Le Grice & Gordon Lucas game lasted 2 hours, with Anthea & John finally winning 21-19.
The final game between Margaret Wilcox & David Lythe v. Clare Hollins & Tony Hesslewood was won by Clare & Tony, with Clare bowling particularly well all day.
We were most impressed by the stamina of some of our older members, some playing 4 games to reach the final in what became quite hot conditions.
A special memtion goes to Margaret Wilcox, who was runner-up for the third time this year! 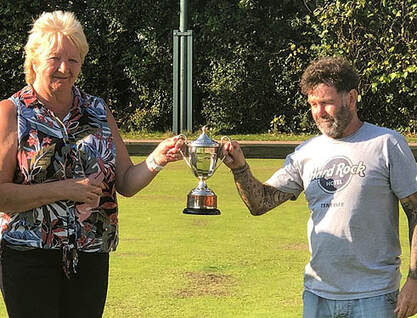 LAVERTON CUP MIXED SINGLES HANDICAP COMPETITION - SUNDAY 23rd AUGUST 2020
We had a good turnout of 26 members and judging by some very close matches a pretty accurate handicap allocation.
We were fortunate with the weather, again missing the worst of the showers, and everyone seemed to enjoy the occasion played in a competitive but friendly spirit.
We had a good range of players from the various leagues the club plays in and also pleasingly newer members and some we haven't seen for some time.
The final was between Jock Timlett and Gordon Lucas. The score maybe didn't reflect the high quality of the bowling from both of them with Jock winning in the end. 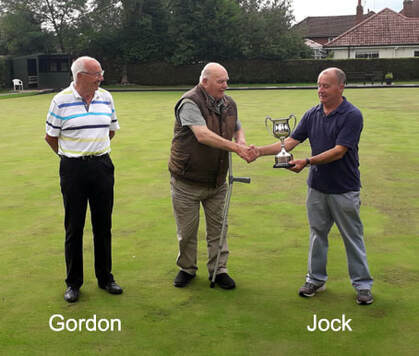